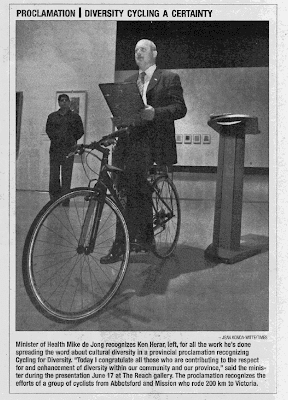 Ken Herar has been called a “Champion of Diversity” from Abbotsford Community Services, works as a multi-cultural columnist for the Abbotsford Times.

Now Ken has initiated a proclamation from former Attorney General and current Health Minister Mike de Jong on behalf of the Province of British Columbia, recognizing the efforts of the Cycling for Diversity campaign to unite our diverse communities.

The campaign took a group of riders from Mission to Victoria, BC in order to promote inclusive dialogue in the region, honouring the World Day for Cultural Diversity for Dialogue and Development, and had already encouraged the District of Mission to proclaim annual recognition of the day when the Province made this recent presentation at The Reach.